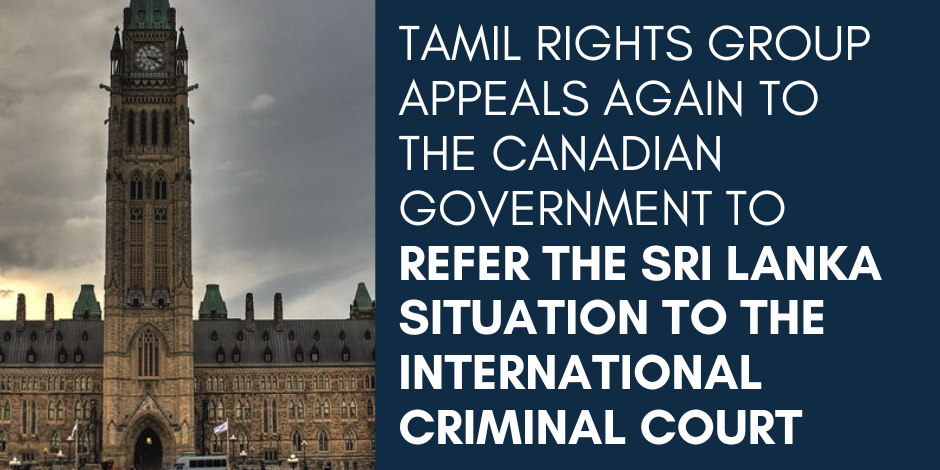 Markham, Canada – The Tamil Rights Group (TRG) welcomes comments made by MP Gary Anandasangaree (Scarborough – Rouge Park) at a recent press conference calling on the Government of Canada to impose sanctions on the former Sri Lankan president Gotabaya Rajapaksa and his brother Mahinda Rajapaksa for their roles in atrocities committed in 2008 and 2009 against Eelam Tamils in Sri Lanka. The TRG is also encouraged by the calls for decisive action and seeking justice for these heinous crimes at the International Criminal Court (ICC).

MP Anandasangaree’s press conference comes at a time where Sri Lanka has been brought to the brink of collapse due to the current economic and political crisis, as well as decades of human rights violations perpetrated against Eelam Tamil with rampant impunity in Sri Lanka. It also comes shortly after the TRG’s Parliamentary Petition 441-00583, in support of its Communication under Article 15 of the Rome Statute to the Office of the Prosecutor at the International Criminal Court (ICC), was presented to the Canadian House of Commons on June 15, 2022, with the support of MP Garnett Genuis (Sherwood Park – Fort Saskatchewan) and MP Jasraj Hallan (Calgary Forest Lawn).

The Communication, which was submitted to Prosecutor Karim A. A. Khan QC on November 9, 2021 and can be read in full here, requests a preliminary examination into crimes against humanity of deportation and persecution committed against Eelam Tamils within the territories of state parties to the ICC. While Sri Lanka is not a party to the Rome Statute, TRG’s major submission presents compelling arguments to the ICC for opening an investigation based on the precedent set by the Myanmar – Bangladesh case at the ICC.

TRG’s Parliamentary Petition calls upon the Government of Canada, as a State Party to the Rome Statute of the International Criminal Court and relying on the evidence and legal argumentation contained in TRG’s Article 15 Communication, to refer the Situation to the ICC so that, among other things, the Prosecutor can expedite an investigation without the need to seek authorization from a pre-trial chamber. TRG is hopeful that with MP Anandasangaree’s press conference, the Government of Canada will positively receive TRG’s petition, and refer the Sri Lanka Situation to the ICC.

Twelve years have passed since the United Nations first started trying to hold Sri Lanka accountable for its gross violations of human rights and international humanitarian law. The former regime has not only unilaterally withdrawn from the UNHRC Resolutions that the state itself co-sponsored in 2015, but former President Gotabaya Rajapaksa had also publicly vowed to protect the alleged war criminals of the armed forces from any domestic or international accountability mechanisms. With the appointment of a discredited former Prime Minister, who could not even win his own seat in the last parliamentary election, to the post of President, there is little chance a new regime will genuinely change course to progress accountability.

“Canada has become the first national Parliament to mark a Tamil Genocide Remembrance Day and so boldly recognize what happened to Eelam Tamils as a genocide. We are heartened immensely by this recognition and proud of the Canadian Government for the commitment shown towards the prevention of atrocity crimes as a priority. Such recognition, however, necessitates further action, which is why we are calling upon the Canadian government to assist the Tamil community’s fight for justice and accountability, including at the ICC. By referring the Situation to the ICC, Canada can play a leadership role in ensuring that the Prosecutor initiates an investigation into atrocity crimes committed by the perpetrators in Sri Lanka, similar to how Canada recently took a leadership role in referring the situation in Ukraine to the ICC. This will also align Canada with the call from the United Nations High Commissioner for Human Rights in January 2021, which looked to member states to become involved in advancing accountability through the referral of the situation in Sri Lanka to the ICC and actively pursue investigation and prosecution of international crimes before their own national courts under the principle of universal jurisdiction.”
– Katpana Nagendra, Secretary and Spokesperson, Tamil Rights Group