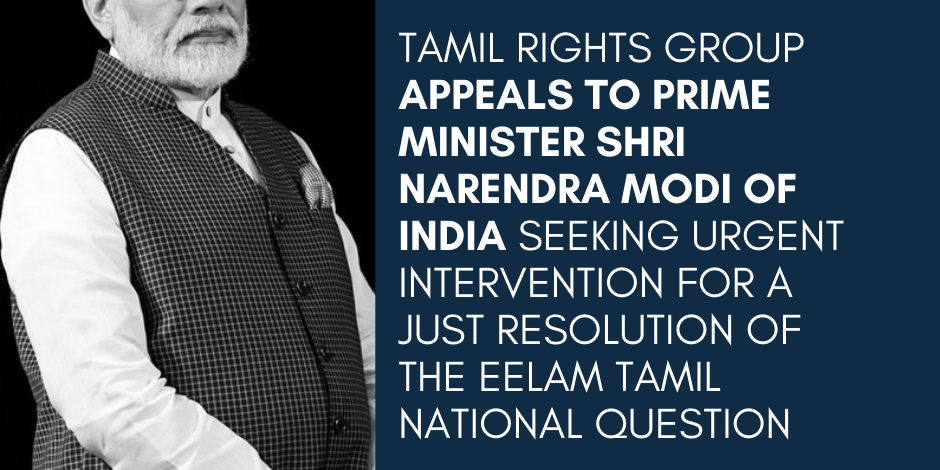 Markham, Canada – On March 1, 2022, Tamil Rights Group (TRG) wrote to the Prime Minister of India, the Honourable Shri Narendra Modi, requesting him to act urgently to alleviate the suffering of Eelam Tamils by having India take the lead in bringing about a lasting solution, with support from the international community, including the United Nations.

The Eelam Tamil people are at a critical juncture as they continue to be subjected to grave injustices while awaiting a just political resolution 13 years after the Tamil Genocide that marked the end of the armed conflict. It is imperative that India, with its renowned democratic and humanitarian traditions, use its regional leadership to ensure that meaningful steps are taken immediately by the Government of Sri Lanka to fully implement a resolution to fulfill the legitimate aspirations of Eelam Tamils, which meets the underlying conditions and the fundamental principles proposed in TRG’s appeal in accordance with the intent and spirit of the Indo-Lanka Accord of July, 1987.

In addition to such a meaningful resolution, TRG’s appeal also lists critical issues that need to be addressed urgently by the Sri Lankan Government to not only demonstrate its commitment, but also to build trust and confidence about its desire to make the necessary political changes and upholding of human rights in ensuring a just resolution to the Eelam Tamil national question, thereby attaining harmony within Sri Lanka. The critical issues relate to the demilitarisation of the Northern and Eastern Provinces; halting land grabbing and confiscation; repealing draconian counter-terrorism legislation; release of all political prisoners and providing information about enforced disappearances; eliminating hate speech targeting communities based on language, religion, and culture; and providing emergency relief and development aid for the Eelam Tamil people.