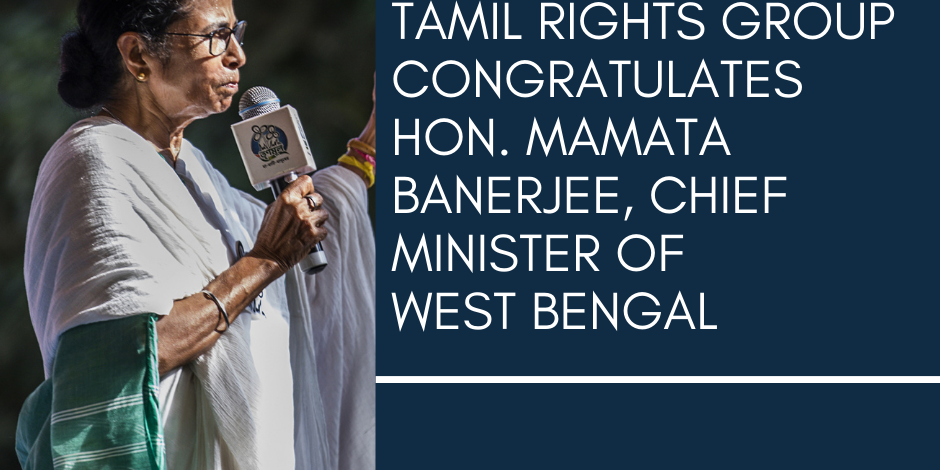 Toronto, Canada – Tamil Rights Group congratulates the Honourable Smt. Mamata Banerjee on her decisive victory in the Bhowanipore by-poll with a record margin of 58,835 votes thereby securing her continued Chief Ministership of West Bengal. Smt. Banerjee’s victory is not only one for austere, dignified, and disciplined political leadership but re-affirms the long cherished vision of a strong and secular India.

Tamil Rights Group (TRG) is an international not-for-profit organisation, headquartered in Canada, that seeks to further strengthen advocacy efforts for transitional justice and accountability for the Tamils of Eelam through international law measures, expanded global diplomacy, and defending their civil liberties within Sri Lanka. To this new chapter, TRG brings together a multigenerational team, deep networks within civil society in the traditional homelands and across the diaspora, and activists directly connected to the struggle for Tamil rights since the early 1970s.

TRG strongly believes Smt. Banerjee’s empathetic and farsighted leadership can benefit its mission to achieve the legitimate aspirations of the Eelam Tamil people who have been waiting for over 70 years for justice and accountability in Sri Lanka. Colonisation policies and actions may have replaced machine guns and Kfir jets but the genocidal project of the Sri Lankan state against Eelam Tamils continues unabated under successive Sinhala majoritarian governments even after the end of the armed conflict in 2009. The Indian people and Eelam Tamils have been bound by a shared history of culture and tradition for millennia. Eelam Tamils, if given the political autonomy they seek, can only further strengthen these ties and be of decisive support to India’s security and defence interests in the Indian Ocean and the Indo-Pacific in the years to come.