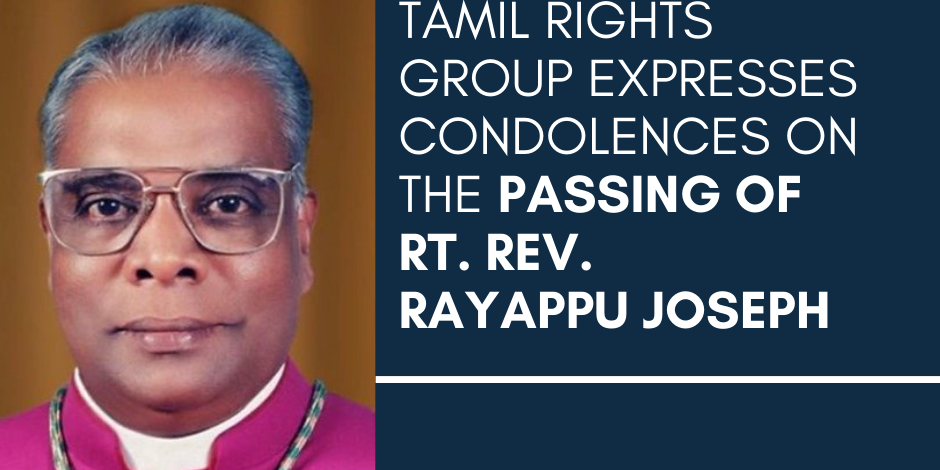 Markham, Canada –Tamil Rights Group (TRG) expresses its heartfelt condolences on the recent passing of the Right Reverend Dr. Rayappu Joseph, the former Roman Catholic Bishop of Mannar. His passing on April 1, 2021 at the age of 80 concludes a long and dedicated life tending to the spiritual, secular, and political needs of his beloved Tamil people.

Born in 1940 in Neduntheevu, Rt. Rev. Joseph was educated at St. Patrick’s College, Jaffna and St. Joseph’s College, Anuradhapura and was enrolled at St. Martin’s Seminary in Jaffna and the National Seminary in Ampitiya and later read for a doctorate in Canon Law at the Pontifical Urbaniana University in Rome. Since being ordained as priest and his appointment as the Bishop of Mannar in 1992 by His Holiness John Paul II, Rt. Rev. Joseph has been a powerful advocate for peace in Sri Lanka, a fearless activist for the rights of the Tamil people, and a keeper of the conscience of the Tamil Nation.

During and after the end of the armed conflict in Sri Lanka in 2009, Rt. Rev. Joseph worked alongside numerous international peace organisations and local human rights activists to advocate for the rights of vulnerable peoples, including political prisoners, persons with disabilities, internally displaced persons, orphaned children, and others. When he gave testimony in front of the Sri Lankan government’s cosmetic Lessons Learnt and Reconciliation Commission in 2011, Rt. Rev. Joseph provided a stinging rebuke of the government’s attempts to whitewash its culpability in prosecuting an unconscionable war against the Tamil people and demanded to know the whereabouts of the 146,679 people in the Vanni region who are yet to be accounted for since the Mullivaikal genocide of May 2009. That Rt. Rev. Joseph did this for so long and so courageously without the broader and consistent support of the Catholic Church in Sri Lanka speaks to his singular commitment to his flock that transcended religious, caste, and communal borders of the Tamil people.

Even as the Tamil Nation around the world mourns his death, his life will continue to provide faith, inspiration, and action for the Tamil people to lead themselves out of bondage.

I’m called a controversial Bishop because there are ‘controversial’ issues taking place and when I speak on those issues I turned to be ‘controversial If I speak out, I am an ‘outspoken Bishop’. If I care for the poor and fight for justice, I am an anti Sri Lankan, a LTTE or a separatist. So, what am I to do? I care less about these names, but I will keep voicing against injustice and fight against human rights violations. – Rt. Rev. Rayappu Joseph (August 5, 2012)