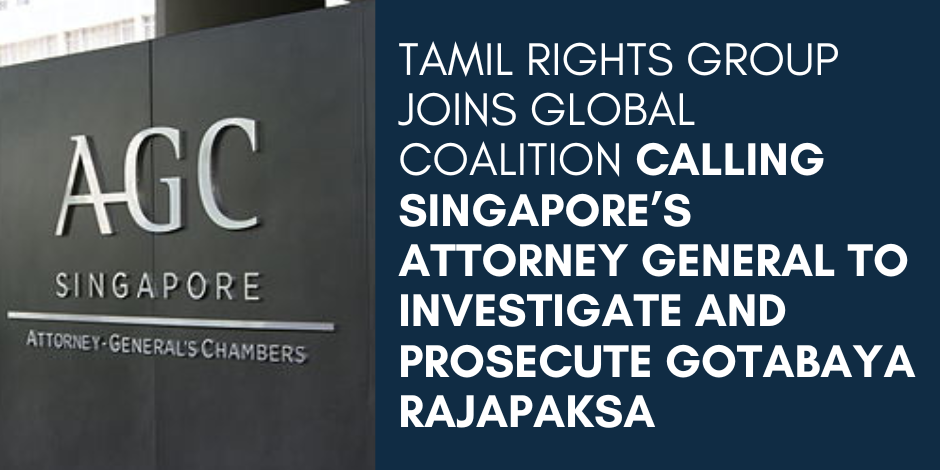 Markham, Canada – The Tamil Rights Group (TRG) has joined 17 Tamil and global human rights organisations in issuing a joint letter calling on the Attorney General’s Chambers in Singapore to investigate and prosecute Gotabaya Rajapaksa for his alleged role in perpetrating serious crimes under international law on Eelam Tamils during the ethnic conflict in Sri Lanka. Rajapaksa fled the island nation as mass protest due to the current dire situation in Sri Lanka escalated and is currently understood to be in Singapore on a temporary visit visa.

Rajapaksa who has served as Defence Secretary and later President of Sri Lanka, has been reliably accused by reputable organisations for being responsible for the most unconscionable of crimes committed on innocent Tamils, including war crimes, crimes against humanity and genocide. During his time as defence secretary, he had command line responsibility for continued intentional heavy shelling of the civilian population, hospitals and humanitarian operations, deliberate destruction of food supplies to the population affected by war and the mass extermination of Tamil lives through the “Mullivaikkal” massacre at the end of the military conflict. He is also known for sanctioning the ruthless murder of surrendering LTTE personnel and as the architect of the dreaded “white van” abductions responsible for countless number of enforced disappearances before, during and after the military conflict, where the people who “disappeared” are believed to have been subjected to torture, rape, other forms of sexual violence before being killed.

TRG has been relentlessly pursuing justice and accountability for Eelam Tamils through actions under international law and last year submitted a major Article 15 Communication to the Chief Prosecutor of the International Criminal Court (ICC) requesting a preliminary examination into crimes against humanity of deportation and persecution committed against Eelam Tamils within the territories of state parties to the ICC. While Sri Lanka is not a party to the Rome Statute, TRG’s submission presents compelling arguments to the ICC for opening an investigation based on the precedent set by the Myanmar – Bangladesh case at the ICC.

TRG urges the Government of Singapore to investigate and initiate proceedings against Gotabaya Rajapaksa, upholding the principles of international law and the responsibility to protect people from such atrocity crimes under the UN Charter.