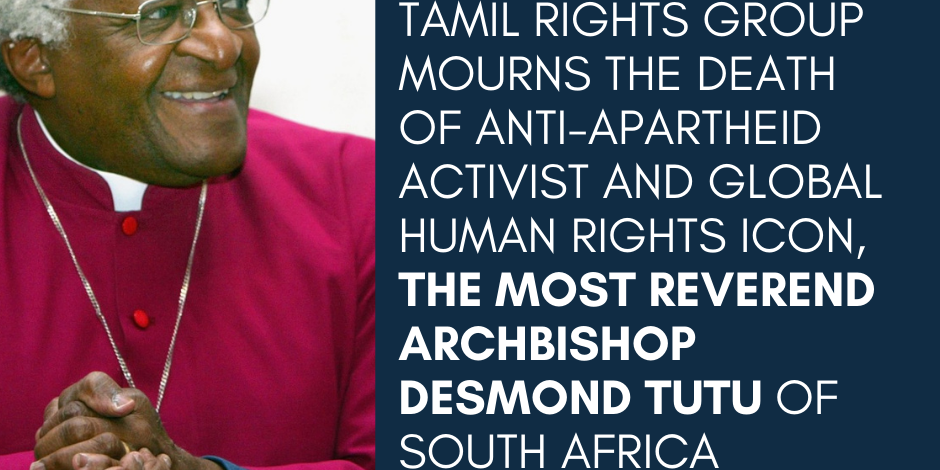 Markham, Canada – Tamil Rights Group (TRG) joins hundreds of thousands of Eelam Tamils and the international human rights community in bidding farewell to anti-apartheid activist and global human rights icon, The Most Reverend Archbishop Desmond Tutu of South Africa. He will be deeply missed not only within his beloved South Africa but around the world.

Archbishop Tutu was a true statesman without a state. He championed the rights of those who suffered the most, finding inspiration in his faith to address the injustices of the secular world. His resolute stance in the face of apartheid as the Archbishop of Cape Town and subsequently his yeoman efforts to achieve restorative justice for the victims of the apartheid regime as Chair of South Africa’s Truth and Reconciliation Commission has inspired countless human rights champions around the world, including those who advocate for Eelam Tamil rights.

Eelam Tamils and progressive allies are indebted to the groundbreaking work of Archbishop Tutu. More so than anyone else in modern times, he clearly demonstrated the way forward to dismantle systemic oppression and establish a new, more just order. The most appropriate way to honour Archbishop Tutu’s legacy is for all of us to carry forward not just the fight for Eelam Tamil rights but to continue to stand in solidarity with oppressed peoples and nations around the world on the long road to our collective freedom.

Rest in power, Your Grace.