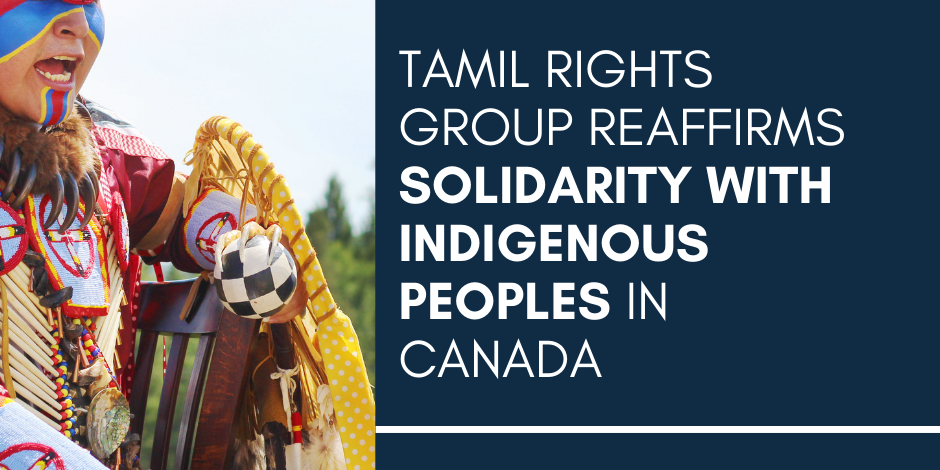 Markham, Canada – Tamil Rights Group (TRG) is saddened – but unfortunately not surprised – by yesterday’s finding of 751 unmarked graves on the grounds of the former Marieval Indian Residential School in Regina, Saskatchewan. This is the latest in a series of similar discoveries now coming to light since the remains of 215 children were found at the Kamloops Indian Residential School in British Columbia a few weeks ago.

Last month, the Cowessess First Nation began using ground-penetrating radar to locate unmarked graves at the cemetery of the Marieval Indian Residential School in southeastern Saskatchewan. The Cowessess have reiterated that yesterday’s announcement marks only the first phase of their search efforts. Similar technology was also used to locate the mass graves in British Columbia by the Tk’emlúps te Secwépemc First Nation where the remains of children believed to have been as young as 3 was found. That these truths are coming out during National Indigenous History Month is bitter irony for all indigenous peoples even as several cities across the country are calling for the cancellation of this year’s Canada Day celebrations.

These announcements are not a surprise for Indigenous people as survivors have long testified about the horrors of the residential schooling system in Canada. A deliberate and key part of the colonial government’s policy of forced assimilation of indigenous communities, approximately 150,000 First Nations, Métis and Inuit children were abducted from their families and placed in 130 state-run boarding schools between 1831 and 1996 – many of whom never returned home. In its landmark report in 2015, the Truth and Reconciliation Commission of Canada declared residential schooling played a pivotal role in Canada’s (ongoing) “cultural genocide” of Indigenous people that the government and church were complicit in.

In mourning with Indigenous peoples in Canada as survivors of the Tamil genocide in Sri Lanka, TRG reaffirms its commitment to continue learning about and recognizing its own settler privilege and use it to reinforce the call for justice, accountability, and reparations for indigenous communities across Canada. While we hear the condolences being expressed by elected officials and acknowledge that some funding is now being released, there is much more work to be done. Specifically, we echo the recent sentiments expressed by the Honourable Justice Murray Sinclair, chair of the former Truth and Reconciliation Commission, and call upon all orders of governments in Canada to fully implement all 94 calls to action of the Commission without any further delay.