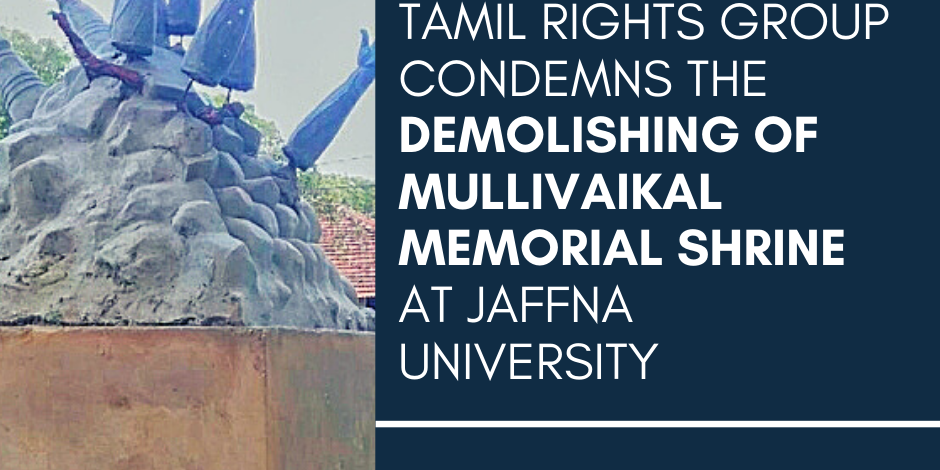 Markham, Canada – Tamil Rights Group (TRG) condemns the Government of Sri Lanka’s latest attempt to erase Tamil heritage and calls upon the Government of Canada to do more to hold Sri Lanka accountable for its ongoing genocide against ethnic Tamils on the island.

On January 8, 2021, Sri Lankan security forces comprising of police, military intelligence, and the Special Task Force – a paramilitary unit of the police notorious for its brutal encounters with Tamil civilians over the years – entered the premises of the University of Jaffna to demolish a memorial shrine installed by students in 2019 to commemorate the 10th year anniversary of the end of the civil war in Sri Lanka. The final battle, which came to a bloody end in the coastal village of Mullivaikal, resulted in the deaths of more than 70,000 Tamil civilians according to official UN estimates and nearly 150,000 based on local census records. A UN special report, Report of the Secretary-General’s Panel of Experts on Accountability in Sri Lanka, released shortly after the war noted that most of these civilian deaths were as a “result of indiscriminate shelling by the Sri Lankan military” and concluded that “the conduct of the war represented a grave assault on the entire regime of international law designed to protect individual dignity during both war and peace.” In destroying this shrine yesterday, the Sri Lankan state has yet again sought to deny Tamils the right to memorialise and remember their dead and missing – and immediate resistance against these attempts saw the arrest of student protesters and intimidation of the Mayor of Jaffna by police that was captured on video.

This latest destruction of a Tamil memorial carried out under the cover of darkness not only implicates the unlawful intent of the Sri Lankan state but also reveals an all too familiar pattern of ongoing erasure, structural violence, and genocidal intent against Tamils – and now also increasingly against Muslims – on the island. In this context of memorialisation, it is important to recognise that in addition to the state’s own numerous memorials that have been erected throughout the traditional Tamil homelands since the end of the war much to the resentment of the local population, several universities in other parts of the country have been allowed to install similar memorials to commemorate the mostly ethnic Sinhala, Marxist armed insurrections against the state in the 1970s and 1980s. It is further troubling that this brazen act was committed a mere two days after the visit to the island by India’s Minister of External Affairs, Dr. S. Jaishankar, who, amongst other matters, urged the Sri Lankan government yet again that “it is in Sri Lanka’s own interest that the expectations of the Tamil people for equality, justice, peace and dignity within a united Sri Lanka are fulfilled.”

TRG also acknowledges the statements made by several elected officials in Canada across different orders of government since yesterday condemning this latest act of the Sri Lankan state against the Tamil people. That this act of violence happened even as Tamil Heritage Month is being widely celebrated across Canada is noteworthy and we hope many more of our elected leaders take a public stand on this matter in the coming days. We also call upon the Government of Canada to play an even more active role in the upcoming 46th session of the United Nations Human Rights Council. Specifically, we urge for broad parliamentary consensus that can enable Canada, as a member of the Core Group on Sri Lanka, to work with its fellow members – most notably the United Kingdom – to sponsor a special resolution to create an International Independent Investigative Mechanism relating to Sri Lanka to investigate and prosecute for serious international crimes committed in Sri Lanka. Canada has previously demonstrated its global leadership on similar matters by extending political support and material aid for such independent investigative mechanisms that were more recently created for Myanmar and Syria and previously for Rwanda, Sierra Leone, Cambodia, and the former Yugoslavia. By doing so, Canadian parliamentarians can truly demonstrate meaningful solidarity with their Canadian Tamil constituents and the Tamils of Lanka.

Tamil Rights Group (TRG) is an international not-for-profit organisation, headquartered in Markham, Canada, that seeks to further strengthen advocacy efforts for transitional justice and accountability for the Tamils of Lanka through international law measures, expanded global diplomacy, and defending their civil liberties within Sri Lanka. To this new chapter, TRG brings together a multigenerational team, deep networks within civil society in the traditional homelands and across the diaspora, and activists directly connected to the struggle for Tamil rights since the early 1970s.