Yet Another Black July Anniversary Passes Without Justice and Accountability 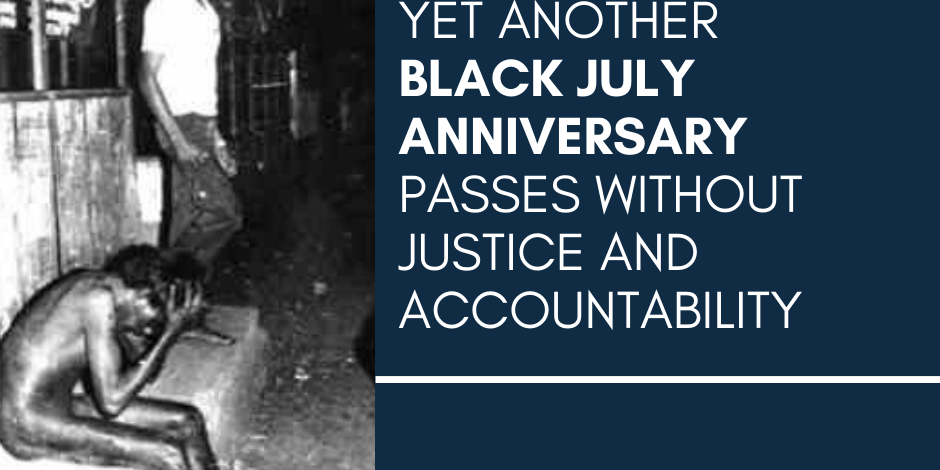 Under the Convention on the Prevention and Punishment of the Crime of Genocide, acts of murder committed with intent to destroy, in whole or in part, a national, ethnic, racial, or religious group as such are considered as acts of genocide. The evidence points clearly to the conclusion that the violence of the Sinhala rioters on the Tamils amounted to acts of genocide. – International Commission of Jurists Review (December 1983)

Markham, Canada – Tamil Rights Group (TRG) joins hundreds of thousands of Eelam and Upcountry Tamils around the world and in the homeland in commemorating the conclusion of another anniversary of the 1983 Black July anti-Tamil genocide in Sri Lanka. 38 years have passed since this heinous act against the Tamil people for which justice for survivors and families of victims remains as elusive as ever.

During a week-long period at the end of July in 1983, the capital city of Colombo and several other cities and towns were engulfed in flames as organised mobs exclusively made up of ethnic majority Sinhalese, aided and abetted by elected representatives and senior officials of the then government of J.R. Jayewardene, went on a planned rampage against the lives and economy of the Tamil people. The violence concluded leaving behind thousands of dead and injured Tamils, including Tamil political prisoners detained at the notorious Welikada Prison; tens of millions of dollars worth of Tamil-owned homes and businesses reduced to ashes; and over a hundred thousand Tamils internally displaced. This earlier genocidal act against the Tamils of Eelam also drove thousands of them to seek asylum in other countries – nearly 2,000 of whom came to Canada – who, in the intervening years, have forged the influential global Eelam Tamil diaspora.

It is a commonly held belief that Black July started because of a roadside bomb ambush by the Liberation Tigers of Tamil Eelam (LTTE) on an army patrol truck in Thirunelveli, Jaffna in which 13 soldiers and the LTTE’s commanding officer Lt. Sathasivam Selvanayagam died. However, subsequent research has uncovered a master plan that was hatched by government and military leaders in the aftermath of the anti-Tamil pogrom of 1981 which itself saw violence again erupting in the homeland with the ethnic biblioclasm of the iconic Jaffna Public Library. Senior Sinhala government ministers, from the virulently racist Cyril Mathew to the former Oxford Union president Gamini Dissanayake, as well as military leaders such as Major General Janaka Perera, who cut their teeth in brutally suppressing the 1971 JVP Insurrection, architected the violence by bringing in attackers from the “outside” and arming them with electoral rolls to more easily target residential and commercial properties of Tamils while being egged on by Buddhism betraying monks such as Elle Gunawansa.

It is also important to recognise that the genocidal violence perpetrated on the Tamils was a state policy that was executed well before Black July. Even in the lead up to the atrocities committed in July 1983, police-led violence was unleashed on Tamil civilians in Trincomalee a month earlier which saw over 200 Tamil-owned homes and Hindu and Christian institutions burned down, the deaths of 19 Tamils, including women and children, and more than a hundred Tamils injured. It was against the backdrop of this attack that the then elected head of state, J.R. Jayawardene, articulated in his now infamous interview for the London Daily Telegraph that he was no longer worried about the lives or opinions of the Tamil people and that “really, if I starve the Tamils out, the Sinhala people will be happy.” In the aftermath of Black July, the Ceylon Workers Congress’ S. Thondaman, then a government minister himself, admitted that even before the anti-Tamil pogrom began in Colombo, the stage was already set for Black July’s state violence against Tamils. In March 1983, security forces attacked the Gandhiyam Society’s rehabilitation programme for Upcountry Tamils in Pankulam, Trincomalee. They arrested and tortured the society’s secretary-general, Dr. S. Rajasundaram who eventually met a violent death in the Welikada Prison Massacre during Black July, and the society’s president, S.A. David. In subsequent weeks, more Gandhiyam officials were arrested and their offices and vehicles set ablaze. As Thondaman documented, “Communal violence on a large scale commenced with the burning of the huts of (Upcountry Tamil) settlers in the Trincomalee. They were uprooted from their homes in the early hours of 23 July, bundled away and brought against their will to Nuwara Eliya and left as destitute.”

This long-established pattern of genocide against Tamil communities in Sri Lanka, regardless of whether their ancestry is Eelam or Indian and irrespective of whether they live within or outside of the traditional Tamil homelands of the Northern and Eastern Provinces, continues unabated to the present day. There is still no room in Sri Lanka to bring any perpetrators of any act of violence, pogrom, or genocide against the Tamil people over the last 70 years to justice in a domestic court. The curtailing of universal freedoms; the ongoing military occupation of the Tamil homelands and unlawful colonisation and expropriation efforts; and the consolidation of feudal political power under the architects of the Mullivaikal Massacre of 2009 shows no possibility of reprieve for survivors and victims of the Tamil genocide in Sri Lanka unless the international community decides to take uncompromising and unambiguous actions without any further delay.

Every precautionary and preventive action must be taken to counter the re-occurrence of violence and genocide through an International Criminal Tribunal on Sri Lanka addressing past abuses and seeking an appropriate reparative justice. People are seeking for system change and not regime change as different Sinhala political systems and governments have come up with the same final solution for Eelam Tamils over the decades. TRG also urge democratic states to impose sanctions on Sri Lanka until it establishes an international independent judicial mechanism with foreign judges, prosecutors, and lawyers to investigate and prosecute atrocity crimes, including genocide, in accordance with United Nations Human Rights Council Resolution A/HRC/RES/30/1, overcome the institutional impunity of Sri Lanka at the International Criminal Court, and exercise universal jurisdiction against the perpetrators. It is imperative that concerted action is taken now to not only bring justice and accountability, but also to urgently address the plight of the Tamils and other minorities threatened by a program of structural genocide in Sri Lanka.