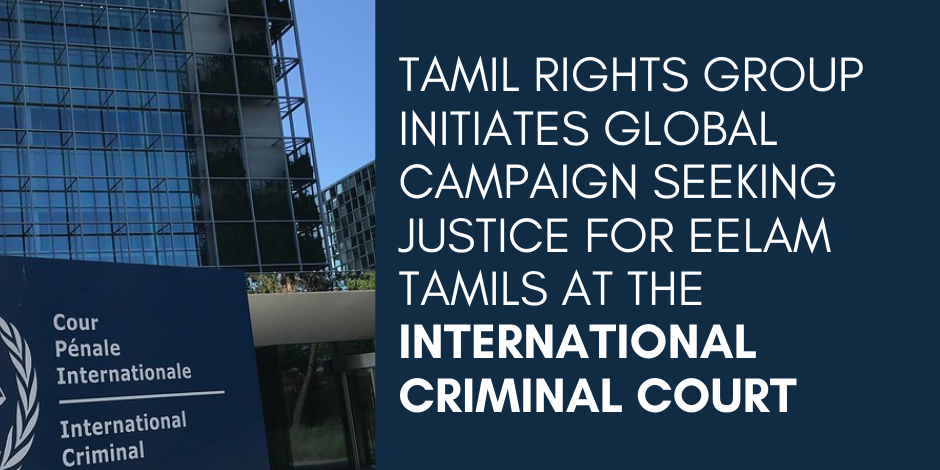 Markham, Canada – In a major move to seek justice for Eelam Tamils and fight against impunity in Sri Lanka, Tamil Rights Group (TRG) has submitted a Communication under Article 15 of the Rome Statute to the Office of the Prosecutor at the International Criminal Court (ICC), requesting a preliminary examination into crimes against humanity of deportation and persecution committed against Eelam Tamils within the territories of state parties to the ICC.

There is mounting evidence that the Eelam Tamil population in Sri Lanka was subject to atrocities that amounted to crimes against humanity and war crimes, particularly in the final stages of the protracted civil war that ended in 2009. Recognising that the ongoing actions of the Sri Lankan state have proven its unwillingness to investigate and prosecute such crimes within domestic judicial institutions, the United Nations Human Rights Commissioner, in January 2021, called for member states to become involved in working to end the impunity surrounding the Sri Lankan armed conflict, both by utilising the principle of universal jurisdiction to initiate prosecutions in foreign domestic courts, and by taking steps toward seeking justice at the international level, including at the ICC.

While Sri Lanka is not a state party to the Rome Statute, there is compelling evidence that various actors, including members of the Sri Lankan government and armed forces, committed the crimes against humanity of persecution and deportation through coercive acts, and that part of the actus reus of these crimes occurred on the territories of state parties, including Canada, Australia, Germany, France, Switzerland, and the United Kingdom. Co-authored by the International Tamil Refugee Assistance Network over the past year, the Communication further contends that, on the basis of the precedent set by the Myanmar/Bangladesh case, the Court should have jurisdiction to investigate the crimes against humanity of deportation and persecution committed by Sri Lankan officials.

“Twelve years have passed since the United Nations first started trying to hold Sri Lanka accountable for its gross violations of human rights and international humanitarian law. Since then, the genocide of Eelam Tamils on the island of Sri Lanka has only continued unabated even as the space for civil society generally in the country shrinks at an alarming pace. The current regime has not only unilaterally withdrawn from the UNHRC Resolutions that the state itself co-sponsored in 2015 but President Gotabaya Rajapaksa has also publicly vowed to protect the armed forces from any domestic or international accountability mechanisms. Against this backdrop, Tamil Rights Group and others have little recourse but to relentlessly seek transitional justice through universal jurisdiction and lawfare, and in this instance specifically at the International Criminal Court.” – Katpana Nagendra, Secretary and Spokesperson, Tamil Rights Group