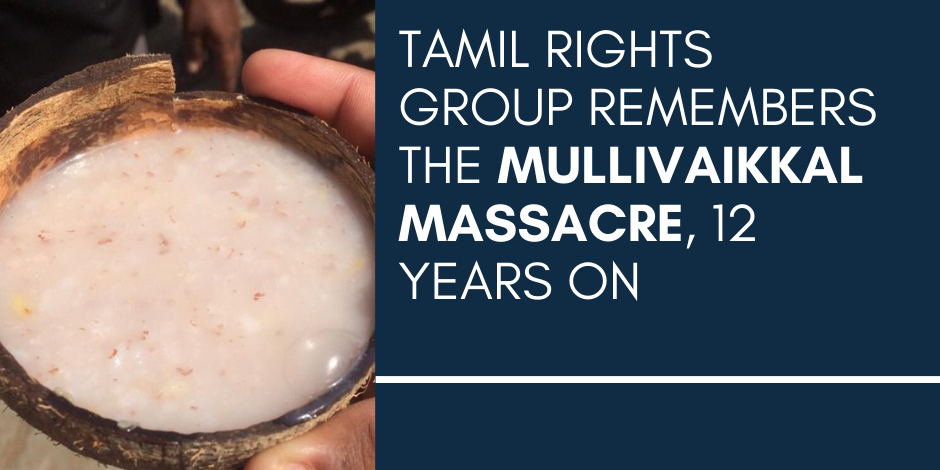 Markham, Canada – Tamil Rights Group (TRG) joins Eelam Tamils in the homeland and around the world in remembering the Mullivaikal Massacre of 2009. It has been 12 long years without any credible advancement towards accountability, justice, guarantees of non-recurrence, and a sustainable political solution for the Tamils of Eelam.

Even though the Mullivaikkal Massacre took place in 2009, the structural genocide of the Tamil people by the Sri Lankan state began much earlier in 1948 with the disfranchisement of around half a million Hill Country Tamils working on the island’s tea plantations and repatriating them to India. Such discriminatory legislation, enacted by majoritarian Sinhala-Buddhist governments, was soon extended to other matters including language, education, agriculture, labour, environment, and public services that began the early exodus of Eelam Tamils and nearly the complete departure of minority communities, such as the Burghers, from the island. It was only a matter of time before the state’s xenophobic politics created the first wave of communal violence against Eelam Tamils during the Gal Oya pogrom of 1956. This violent Sinhala-Buddhist fundamentalism that colonial independence eventually unleashed revealed itself even earlier during the riots orchestrated against Tamil-speaking Muslims in 1915. Elected Tamil leaders were unsuccessful in their parliamentary, non-violent, and democratic attempts to stop the post-colonial Sinhala-Buddhist state from slowly but deliberately manifesting into the apartheid system that it has now become over more than 70 years. It was the failure of such democratic interventions that eventually sparked the armed Tamil resistance movement which then escalated into a conventional war against the Sri Lankan state. This armed civil war culminated in 2009 with the defeat of the Liberation of Tamil Eelam (LTTE) leaving in its wake hundreds of thousands dead and the displacement of well over a million Eelam Tamils within and outside of the traditional homelands.

In the final stages of the Mullivaikkal Massacre of 2009, the international community not only abandoned the Tamil people in a war-without-witness but their tacit cooperation on the Government of Sri Lanka’s military defeat of the LTTE also meant they abrogated their Responsibility to Protect Eelam Tamils from crimes of genocide, war crimes, ethnic cleansing, and crimes against humanity. We are now seeing this all-too-familiar pattern repeating itself in the most recent wave of violence against the Palestinian people for resisting further encroachment on their territories. Even after Mullivaikkal, the international community continues to move at a glacial pace when it comes to justice for Eelam Tamils. Twelve years have passed since the United Nations first started trying to hold Sri Lanka accountable during which time the Sri Lankan state has continued to militarily occupy the Tamil homelands without impunity, further facilitate Sinhala Buddhist settlements, spread hate and discrimination against Muslims, deny fair wages to plantation workers and other daily income earners, allow for Tamil political prisoners to languish without legal redress, and carry out extrajudicial killings against political opponents all the while passing amendments to create an even more autocratic constitution that further consolidates Sinhala-Buddhist hegemony against Eelam Tamils and minority communities. While the most recent UNHRC Resolution A/HRC/46/L.1/Rev. 1 adopted in March 2021 has encouragingly decided to “strengthen the capacity of the Office of the High Commissioner to collect, consolidate, analyse and preserve information and evidence and to develop possible strategies for future accountability processes for gross violations of human rights or serious violations of international humanitarian law in Sri Lanka, to advocate for victims and survivors, and to support relevant judicial and other proceedings, including in Member States, with competent jurisdiction”, further options for advancing accountability is expected to be discussed only at the 51st Regular Session scheduled for sometime in the fall of 2022.

Against this backdrop of the historical genocide of Eelam Tamils and the long arc of the moral universe that continues to deny justice and accountability to victim-survivors, many of whom like the elderly parents in the Families of the Disappeared have passed away in the intervening 12 years, TRG reaffirms its commitment to continue advocating for justice, accountability, and a sustainable political solution for the Eelam Tamil people. TRG commits to doing this by supporting allies within and outside of the global Tamil activist community to access additional international law mechanisms; pursue and defend the political recognition of Tamil Genocide by different orders of governments around the world such as the recently passed Tamil Genocide Education Week Act, 2021 in Ontario, Canada; support the collecting, archiving, and analyzing of collective histories and personal memories as evidentiary information; and expand global diplomacy efforts to new jurisdictions while continuing to press historical allies like the newly elected Government of Tamil Nadu in India.

TRG also recognizes that the ongoing efforts of the global network of Tamil activists remains centred, first and foremost, on the aspirations of the Tamil people in Eelam. The Pottuvil to Polikandy march earlier this year mostly visibly demonstrated the democratic, grassroots, and allyship-driven call of the Eelam Tamil people for political, social, and economic justice despite military occupation and paramilitary surveillance and even as the small number of monuments erected in the traditional homelands remembering the dead and disappeared continue to be demolished and vandalized by the state under the cover of darkness. In standing in solidarity with victim-survivors of the Tamil Genocide and to mark the resistance of the Tamil people of Eelam on this day, TRG urges its network of members, supporters, friends, and allies to light a candle at 18:18 hrs., prepare and serve congee to families and friends, and write to their elected representatives of national and sub-national governments to share our personal and collective accounts of genocide and ask for justice for the Tamils of Eelam.